Why Isn't My Android Device Supported by FiLMiC Pro? 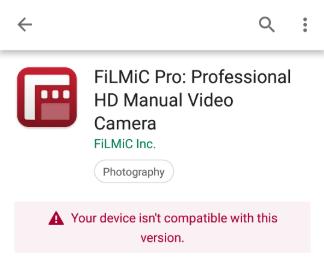 Of the thousands of device variants available on the Android platform, FiLMiC Pro is proud to support over 600 models.   Of course, we wish we could support every model, but many devices are limited by camera framework errors and performance issues that do not allow us to implement FiLMiC Pro's advanced features with utmost stability.  In rare cases, some Android device models must be manually removed from support due to problematic system updates from the OEM.  But in most cases, compatibility issues with any given device are due to a lack of proper Camera2 API implementation.

FiLMiC Pro requires full camera2 compliance so that we can offer support for all of the capabilities that customers expect from FiLMiC Pro.

Unfortunately, if you see the above message when attempting to install FiLMiC Pro, your smartphone is most likely a camera1 device or lacks a full camera2 implementation. It is unlikely that your device will be able to support FiLMiC Pro in the future. We have never seen an instance where a device has been upgraded to support the newer camera2 api once it has been released on the market.